Not long after Groupon turned down the buyout offer, Google has announced it's own group-buying service. A rejection is not a reason to give up, right? 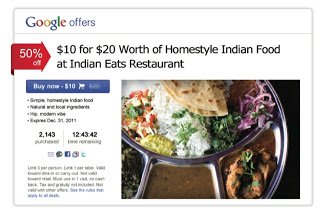 By Mashable: "Google Offers looks and operates much like Groupon or LivingSocial. Users receive an e-mail with a local deal of the day. They then have the opportunity to buy that deal within a specific time limit (we assume 24 hours). Once enough people have made the purchase, the Google Offer is triggered and users get that all-too-familiar $10 for $20 deal for that Indian restaurant they’ve never tried."

No need to discuss their marketing potential: Groupon is going to have a hard time competing with Google. What is worth discussing is their business model, it is absolutely the same as the one adopted by Groupon two years ago: one day, one deal, highlights and fine print. Though the bargain websites have appeared at least a decade ago, only this model has proven to be a key to success and it continues doing so.

The combination of huge discount and short period of time are really magical and they are definitely worth of employing, while it's high time for the market segmentation: think of something those giants cannot offer and your audience will never betray you. At least not until Groupon and Google will use your trick ;)