$6 billion is not enough? No way for Grougle? 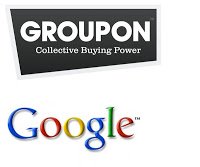 For the last two weeks Groupon being acquired by Google was the most discussed social commerce topics. This was foretold to be a deal of the year. However, now we hear that Groupon has quitted the bargain.

The most obvious reason chewed over by numerous sources is that the price quote allegedly reaching $6 billion was not enough to satisfy Groupon. Indeed some mysterious sources indicate that Groupon's yearly turnover comprises about $2 billion. Meanwhile, the commentators are prone to believe that this figure is similar to those disclosed by Visa and American Express - the total amount of all the transactions processed and is pretty far from the actual revenues.

So what is the catch? The competition in daily-deal industry is rather heavy. Why Groupon just won't snatch a good sum of money and rest on the laurels watching the others racing in this hard rush? The answer can be the following: they are young, only two years old, they have experienced immense success over a short period of time and they are feeling like they can have more.

Groupon itself is a good advertising platform, moreover it has something that other e-commerce companies don't: the strong business connection with offline local business and this moves it to the next level. Most probably they have something else to launch up in their sleeve. What will it be we will learn soon...